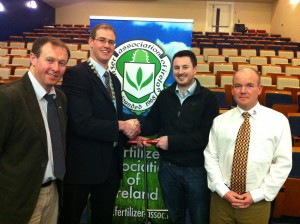 Richard Kennedy, (Clear Power, Co. Laois), was the 2012 winner of the Top Student Award in the Crops Nutrition Management Course delivered by Teagasc in 2012.

Posted in Roll Of Honour

The P & K calculator is an online calculator for estimating P and K fertilizer requirements for grassland and crops. It is available online, or via the iOS and Android Smart Phone Apps.